The Aleta: The Ocracoke mail boat. 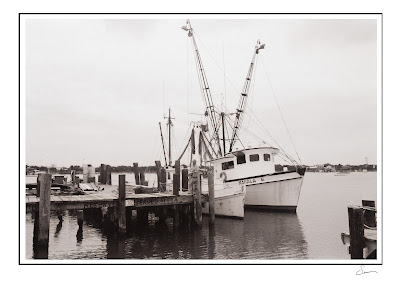 All day today I have been scanning ancient negatives from my vault...a collection that easily exceeds 1/2 million negatives and transparencies going back to my college days in the early 80's up until I made the switch to digital along with everyone else.   I found this picture today.   Taken in the summer of 1985...not a month before I met my wife Leta.  As you can see on the dock...the name stands out.  I had not noticed this image before.  Later that day I was out on the dock and photographed the bow of a boat, the name of which was the ALETA.   After I met Leta I thought it was a interesting coincidence...enough so that I made her a print.  I entered the photograph in the NC State Fair competition that October and it took first place in Photography.
Years later we were visiting Ocracoke to attend a wedding of some neighbors of ours.  Invited to a outdoor reception, Leta and I weren't sure if we were also invited to the rehearsal dinner.  Holding back until the last moment we were ushered inside and invited to find ourselves a seat.  There were only two seats left at a table of what we thought at that time was a "younger" crowd.   Obviously the question comes up with "how did you two meet?".  After relating the story of the photograph, meeting, and photo contest, one of our dinner companions dropped her jaw and pointed to the mantle behind us.
Directly behind our heads was a carved model of the ALETA along with an old postcard showing the boat in it's original use as the Ocracoke mail boat.
When trying to come up with a middle name for my daughter, ALETA seemed the obvious choice.
Back in 85 when I took the original photographs, the ALETA was just a fishing boat with a sleeping captain aboard.  He appeared to be sleeping off a hangover.   I don't know what ever became of the ALETA.   If anyone knows...how about dropping me a line.