I was recently commissioned by an architect to produce artwork for a new restaurant in west Raleigh. Some of you should be familiar with David Mao who 30 years ago opened the Mandarin House in Cameron Village. He is most recently known as the chef behind the popular Duck and Dumpling downtown. His newest incarnation is David's Dumpling and Noodle Bar located in the old Darryl's building at 1900 Hillsborough Street. It's the building where 25 years ago this month, my wife and I met in that very Darryl's. I was honored to be selected to produce art work for the walls. It is something of a scale I had never done before, but was genuinely excited about the possibilities.
Working with owner David and the architect NewCity Design's Shannon Laska, we conceptualized the idea of showing David making the dumpling's and noodles and then building extra large canvases that highlight not only David's personality, but the freshness of his food.
We produced 8 canvases in all, two of which were 11 feet in width, and others 4x6 feet approximately. Traditional canvas bars wouldn't work for this project, so we worked with Jim Casteen over at Filmgraphics to produce custom bars that would not only support the large photographs, but keep them flat without sagging. There was some trial and error, but the results were spectacular.
We produced some other canvases as well, including a collage of David's history, and a welcoming image of the vegetables that he uses with Chinese characters of luck, health, and vitality. I also got my daughter to draw a dragon which we used at the bottom of the image.
A final canvas I produced was from a duplicate negative that I obtained 30 years ago or more on a project while in college. It turned out to be a photograph of the building taken in the 1940's. There was a perfect wall to showcase the image and it turned out great... even if it wasn't my photograph originally.
The photograph above was printed 11' in width and is one of two that adorn the walls in the back dining area. Because the spaces were surrounded by brick, I used a distressed texture that not only helped to blend the images nicely, but also complemented the old brick of the building. Although I shot some of the images on 4x5 (Don't ask me why!), most of the images were shot digitally and enlarged using Alien Skin's BLOWUP. One of the larger single images at the front entrance was actually a quick hand held shot off tripod. Although we did some extensive digital enhancement, you would think it was shot on 4x5.
We just went down there the other night to sample the food, and it's wonderful! With a capital ! Please go yourself and support David's new venture. Enjoy the pictures, but more importantly enjoy the food.
PS. David is having a soft opening so he doesn't get overwhelmed, so waiting a couple of weeks might be a good idea.

Posted by Unknown at 7:57 AM No comments: 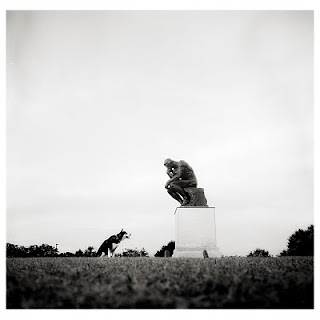 It's not very often that in a show of 40 images and 20 photographers, that one individual gets 5 pieces selected, but we were really pleased to find out that we were one of those individuals. The Raleigh City Museum is hosting it's now annual Portraits of Raleigh Competition starting this Friday night August, 6th, 2010. Out of 100's of entries, we had 5 images selected that cover almost 30 years of my career from 1982 to 2010. Additional images were selected for the digital show.
All but one of the images could be considered purely personal work. It just goes to show you that I probably don't do enough of it. "Rodin's Best Friend" is one of my favorite photographs and was taken on the last day of the Museum of Art's Rodin exhibit of 1999-2000.
Please come on out Friday night to the opening! Music and Wine...and lots of folks! Should be great. All the photography is available for sale and one image receives a prize awarded by popular vote. Obviously I would love you to vote for one of mine, but vote for your favorite and we'll let the chips drop where they may! :)
Go check out the link for more information:
http://www.raleighcitymuseum.org/exhibits/portraits_of_raleigh_II.shtml