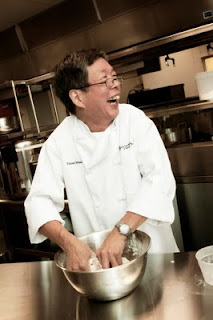 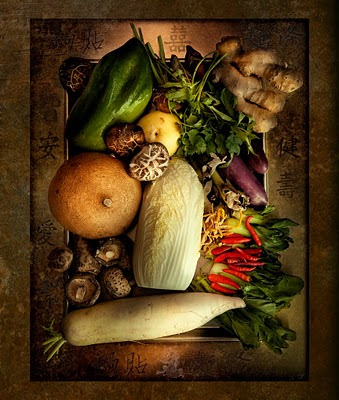 After retiring for a period of about 1 week, long time Raleigh chef David Mao started work on his new restaurant on the corner of Oberlin road and Hillsborough street. Having owned the Manderin House in Cameron Village for 20 years, Mao most recently was the chief chef at the Duck & Dumpling in downtown Raleigh.
His new restaurant was more recently a Red Hot & Blue, but most old time Raleigh natives know it as the original Darryls.
We were asked to supply art work for the interior in a way that was meant to feature David and what makes his food special. With the restaurant in complete disarray, it presented quite a challenge. This image was the last shot and will be hung as a 4'x5' canvas in the front lobby. The chinese characters represent good fortune, love, double joy, health, long life, and welcome...as well as the characters that represent dumplings and noodles. There is also a character that wards off hangovers...well as long as you write it down, tear it up, and put it into a cup of hot green tea. I also included a wonderful dragon that my 11 year old daughter drew for me without any reference. She is the real talent of the family, loves dragons, and expects payment from me for the drawing. The dragon obviously represents happiness, immortality, fertility, etc, and is believed to ward off evil spirits. Gillian certainly captured that essence. I had to include it in this particular piece.
Other canvas show David at work...making dumplings or noodles each one telling a little story...or a collage of historical images of David over time.

There is a lot of buzz about the restaurant opening sometime in the next few weeks. David is such a nice guy. It's been a challenging renovation for him, but I know that his food is going to be excellent. I do hope that he does well.
On a side note...my wife and I met in this restaurant when it was Darryls on August 19th, 1985.
I haven't been able to convince anyone to put up a plaque in our honor, but still trying. :)

Posted by Unknown at 7:36 AM No comments: