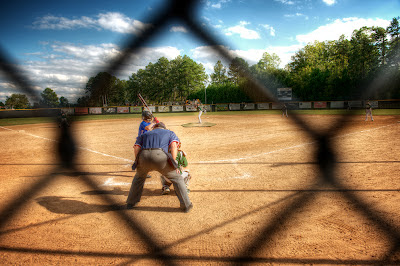 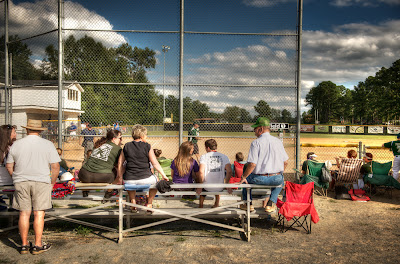 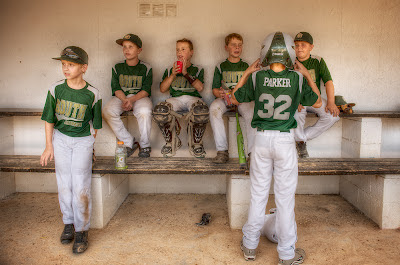 Leaving Atlantic Beach in the 70's, it seemed like the best way to travel was up Highway 50 through Benson and Newton Grove, NC.   As many of that era remember, I have memories of driving through Benson on a Sunday afternoon and having to go over one street to get through town due to all the cars full of teenagers "cruising" until the gas ran out.  It seems like we are all in such a hurry to get where we are going these days that we no longer look around us to see what's off the highway.  Now the quickest way to the beach is down Interstate 40 or along the boring Highway 70.  Kids spend their time listening to iPods, playing video games or watching movies.   I suspect that most kids have no idea where they are heading or what the view is like outside the window.
Leaving New Bern this weekend after completing my 9th MSBike 150, I decided I would take the slower route and drive up Highway 55 from Kinston across to Mt. Olive, Newton Grove, up through Benson and then home.  My primary objective was to visit a pond house sitting just off the road north of Benson.  I had photographed it 20 plus years ago and decided it was worth a followup.  I didn't know it was going to become an afternoon adventure. 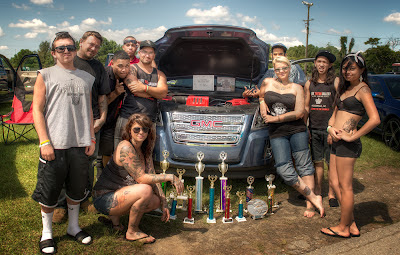 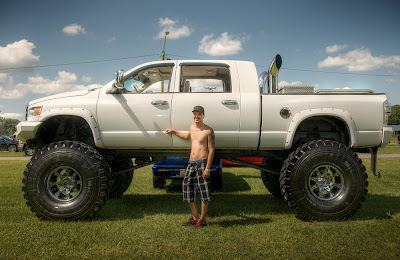 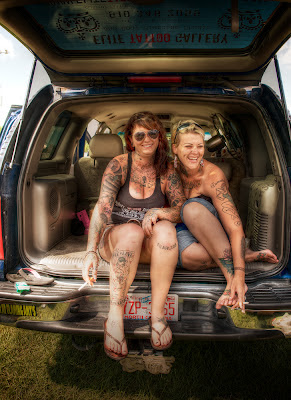 My first stop was at a car show just outside of Kinston.  It was definitely not the kind of car show I was used to.  Monster trucks next to lowriders with bass speakers that shook the ground.  Like I've learned over the years, people are just people...just with different backgrounds and interests, but for the most part are social animals.  I enjoy walking up to strangers and asking about what they do and who they are.  More often than not they enjoy my taking their photograph.
I stopped near Newton Grove and photographed a Midget League All stars game between Johnston County and Chatham County...the first game of the fall season.  It still had the feel of summer with parents and others taking the game very seriously keeping track of stats on scoresheets with at least 4 or 5 coaches on a side.  The kids were good too, especially those on the Johnston County team who were up 11-1 when I left in the 3rd inning. 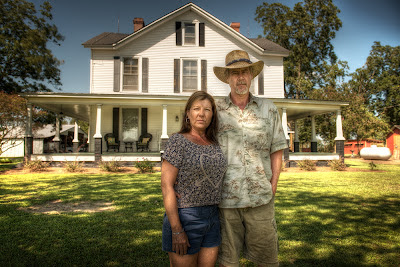 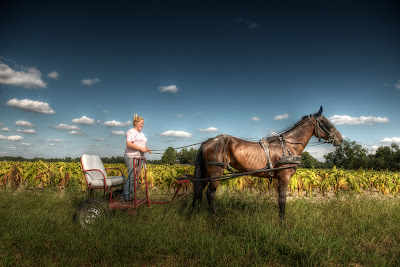 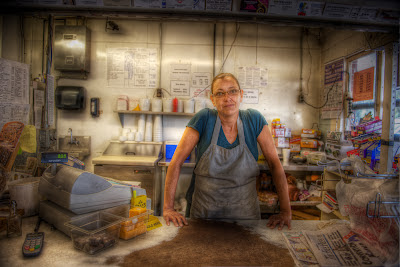 I stopped for a snack at a small convenience store.  The girl behind the counter was as nice as she could be.  I explained to her that I had been photographing people that work hard for a living and she immediately said..."Well, that would be me."    Up the road I came across a wonderful farm house, the kind of house that we all would love to own one day.  Small road lined by trees up to the side of the house...pastures full of goats and chickens surrounding one side and the perfect wrap-around porch.  I always wonder what people are saying when they see me approach.  I'm sure they are wondering what I'm selling.   Actually I'm selling myself.  The honest approach is always the best and more often than not I leave with new friends...and sometimes like this trip...a mason jar.  I figured I'd be able run my car with it if I ran out of gas because it sure wasn't pickles.
Further up the road I saw Marissa testing out a new horse her father purchased up in Amish country.  Buying, training, and selling horses was her fathers business.  Marissa didn't say much except "Yes sir" or "No sir".  Didn't even hesitate to allow me to photograph her, putting the horse exactly where this stranger asked her.  As soon as she was done though...she was gone.  Off to do chores I imagine.  Her father came out talking on the phone.  No nonsense, but quickly assessed I wasn't a threat... almost ignored me as I drove off he back on the phone...a polite but almost dismissive wave as I drove away. 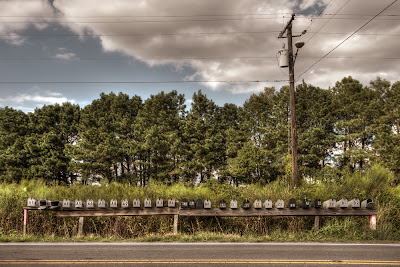 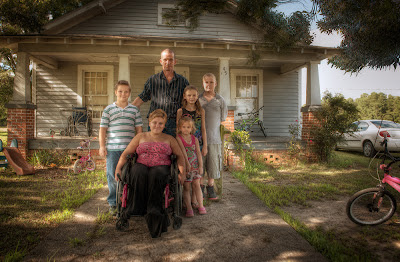 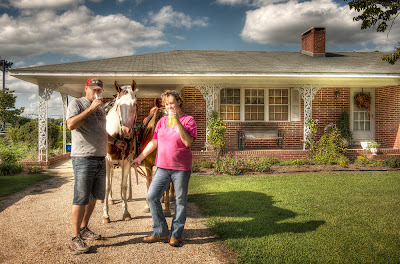 It wasn't too far up the road I had a scare.  Two horses, fully saddled galloped across the road.  They were missing their riders.  If I had been going a little faster and hadn't seen them I'm almost afraid to know what might have happened.   I almost stopped and the horses also turned to look at me...then they continued to run across the lawns of a small roadside neighborhood.  About 1/4 mile up the road I saw a man running.  Figuring he owned the horses I slowed and motioned him to get in.  This stranger jumped into the car without hesitation.  Turns out he didn't know who owned the horses, but was concerned about their running across the highway.  I took him down the side road and drove right up to where the horses stood.  Warren jumped out and cautiously approached, but without success as they again bolted.  He showed patience though and as I watched from the car he was able to mount the less skiddish one and take them back towards the highway.   I drove around and saw what I thought was perhaps his family and the owners, but they pointed to way off in the distance two loan walkers coming out of the fields.   I drove the 1/2 mile and met the husband and wife who were also in training on a new horse.  It had thrown the husband and after she tried to calm the horse down, they both bolted.  They jumped in and I reunited them with Warren and their horses by their house which sat right on the highway.   It must have been a long walk as both downed big drinks before heading back out to continue the training.  Warren who was a friend of the family around the corner walked back to the house where I met several sweet children.  Obviously this was the adventure of the week. 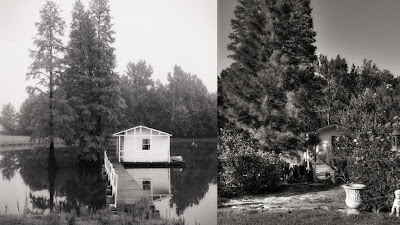 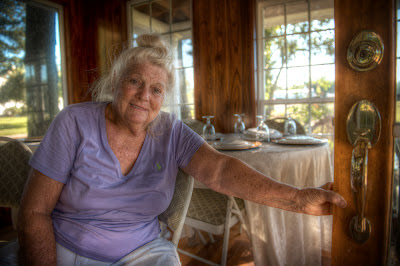 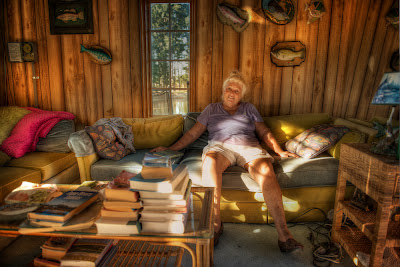 20 years ago, I had photographed this little house from the roadway.  The shot on the left was taken with my 4x5, the one on the right trying to get the same position.  Didn't quite get the feel I wanted, but had a better opportunity to meet someone really cool.   I had looked up the current owner through Johnston County tax records and saw where she lived.  Knocking on the door, Miss Sally stayed behind the storm door.  Suspicious of strangers, she was taken back by the photograph that I showed her...a portrait of the little house her daddy built just about the time he passed away.  I gave her the print which surprised her since no one had ever given her anything before.  She quickly warmed up to me.
I had been chased out by a bull back then and I come to find out it was "Big Mac" that chased me.  Miss Sally inherited the land and she went about making it a little oasis for her to read, host her garden club, and share with family and friends.  Retired from the NC revenue department, Miss Sally had a heart attack last year.  Although my surgery did not involve a heart attack, we were able to talk about blood pressure and medicine and I offered to take her blood pressure.  She was delighted and it was fine...actually less than mine was at the time.  I said I would come back...perhaps bring my biker friends stop and have a great rest stop.  Miss Sally loved the idea and offered to get food for us.  I'll definitely be back. 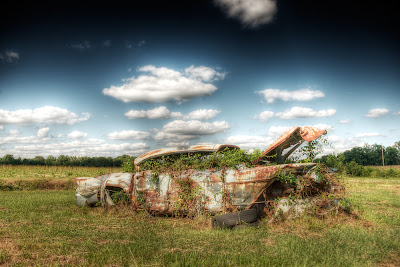 We miss a lot when we drive up the highway for 4 hours.  Getting back quickly to do what?  Cut the grass? Watch TV? Get on Facebook?.   Yes, I do all those things.  I blog, FB, watch TV.  But I think I'll be spending a little more time stopping to smell the roses.  I know it's cliche', but in the course of about 5 hours, only 2-1/2 hours longer than I would have had I just driven home, I met some incredibly nice people...rescued some horses, chatted about baseball, football, chickens, more horses, renovations, cars, work, life, and still had time to make some pictures.  Not a bad day.  I rode 50 miles on my bike in the morning as well.  If every day could be like that....
Now...when to figure out what's in that mason jar?  :) 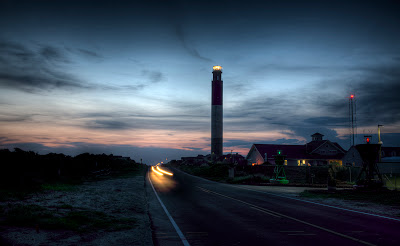 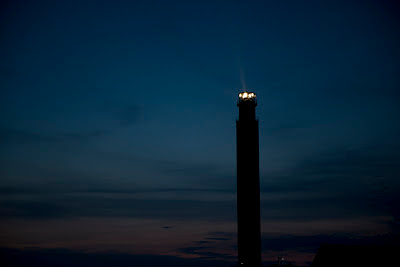 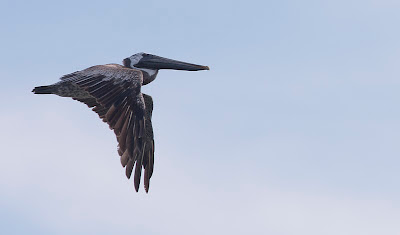 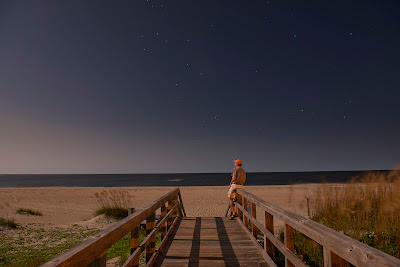 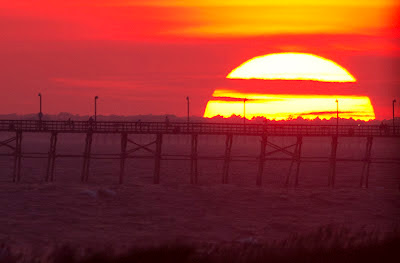 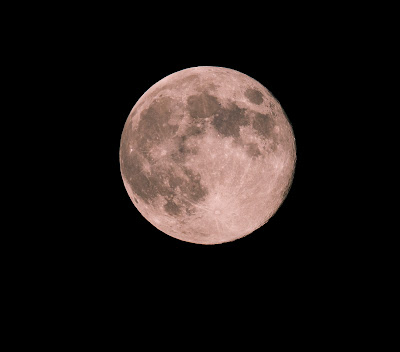 Labor day weekend, my daughter and I headed down to Oak Island, North Carolina to get one more beach trip in before fall activities make it harder to get away.  It's not like we go to the beach that often. This was the third trip this year and is probably all I need as far as sitting on the beach goes.  As long as I have a book, I'm pretty happy.   Two of my goals this weekend was to capture the new moon in some way which obviously I did with the last image, but I've seen this so many times it's not as interesting as I would like.  The second goal was to photograph the Oak Island light, a lighthouse which isn't as attractive as many of the other lighthouses along the NC coast.    When I arrived on Friday night I took a walk out to the beach and was astounded as to how bright it was under the full moon.  The fourth photograph in the series shows the result of a self portrait taken at about 10:30pm in full moonlight.  The 30 second exposure allowed the stars to come in and if one looks closely, you can see the slight movement of the stars.
The lighthouse was shot on Sunday night.   No brilliant sunset that night, but an interesting sky none the less.  The sunset was shot on Saturday night right after dinner.  It had been cloudy, so we were eating dinner at the time.   I then looked out the window and saw the orange ball dipping down on the pier.  I rushed to get the camera and was able to catch just a few frames before it dipped below the horizon.  I don't shoot many sunsets.  I prefer to watch and enjoy them, but also I tend to look in the other direction to see what the intense light is doing.
The pelican was one of the first images of the weekend and I was so captivated by this image, that I spent the next 2 days trying to get a better one, without success.  That's the way it goes sometimes.
Posted by Unknown at 10:19 AM No comments: