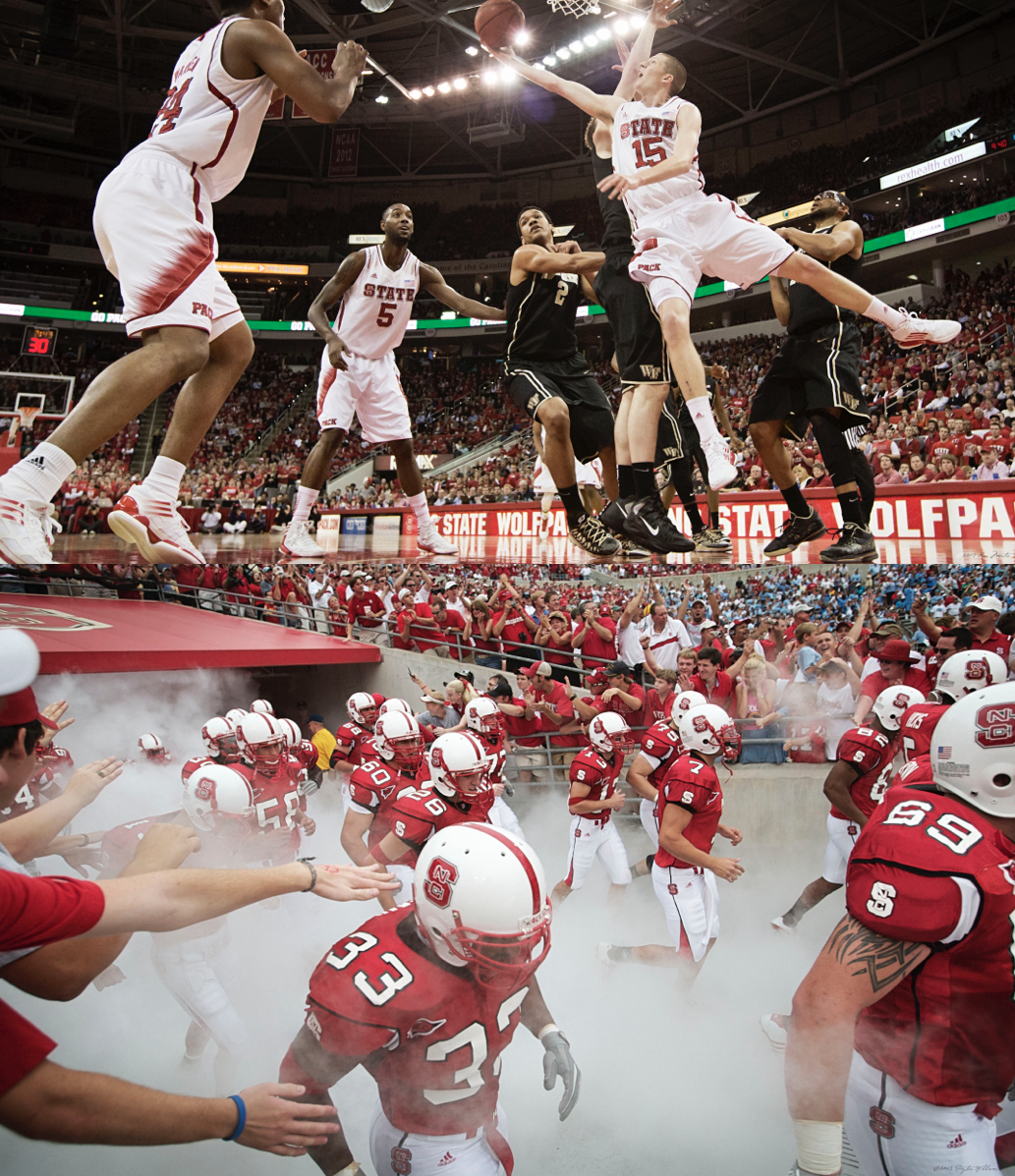 Last fall I was commissioned by the Sheraton Raleigh to provide wall art throughout their lobbies and restaurant, Jimmy V's.  Because I haven't shot NC State sports since 1997, I licensed these two images from the talented Ken Martin and Peyton Williams, two photographers that cover the Wolfpack today.
The Sports Wall in the downstairs lobby featured these two images along with two others as 36"x60" canvas photographs printed and mounted by my good friend Jim Casteen over at Filmgraphics.  A lot of work went into these making them look as good as they could be.
Obviously a fan...probably a state fan...thought they looked good enough to steal.  Last Saturday night, these two prints were removed from the wall...ripping the screws right along with them.
The Sheraton is currently trying to look at video from the back door, but as yet haven't found who did it.   It would not have been easy to carry one print, let alone two prints without being seen that night.  Hopefully the video cameras will provide some clues as to when and who took the prints.   I'm personally not being hurt by this.  The Sheraton wants to replace the photos obviously.  There is a large gap in the wall where they once hung.  I will have to recreate the images for the wall not being able to charge the full price again.  What I'd much rather do is rehang the original prints after they are returned.
Today NC State will be playing Miami at the ACC tournament in basketball.  I don't relish the fact that there is some NC State fan smiling at his stolen treasure while watching the game.  Hopefully it's not an NC State fan.  If they want to buy the prints at the original cost and then pay for replacements, then I'm sure the Sheraton won't press charges...but then I can't speak for the Sheraton.
I'm sure that they... like I do... just want them back.   If you see these prints anywhere, please let me know at simon@simong.com.

What I would like to do is charge the perps the full price for the prints they stole...pay also full price for replacements for the Sheraton.  We'll pay a licensing fee to the two photographers, but then the stolen prints will be donated to the Boys and Girls Club building in Raleigh.  Any profit after production will also go the the Boys and Girls Club.  That's just my two cents.