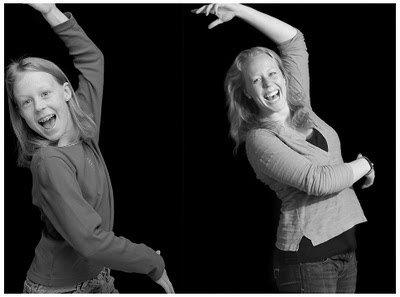 Part of the problem of revisiting photographs that I did 10 years ago or more is scheduling a session with a subject living in another state. I was finally able to get Hanna to Raleigh to recreate a shot I did when she was 12 years old.
As I continue shooting, I realize that there are others doing similar projects and hope that by the time I've completed 20 or more images, that it won't have become passe'. It's fun though and obviously ideas are rarely unique.
I do believe though that photography's most important virtue is it's ability to document the passage of time. After 20 years, most of us don't look at images and assess how good a photograph it is...we look at it as to what things or people looked like. It's why most commercial photographs tend to be shelved once they become dated. It's only when they become "retro" and "cool" do we see them used again.
People change...they age...but often there are undeniable qualities that always stay the same. I hope that these images will show not only the obvious changes which are fascinating, but also the little idiosyncrasies that stay very much the same over time.
Hanna...a rambunctious 12 year old in 2001...much like my own daughter...has now almost graduated from college with 2 degrees. She has traveled and lived in Europe, Africa, and South America...and for a short time in Manhattan. She is about ready to take on the world. Ten years from now, we will be doing this image again I hope. Will she be married...have kids...a thriving career? Time will tell.

Posted by Unknown at 1:17 PM No comments: