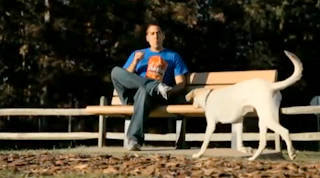 Congratulations have to go to Five Points Productions
for coming up with the second most popular ad during the Super Bowl.   Both Leta and Gillian loved the concept even before we knew it was locally produced.   It just goes to show you how humor and a
controversial issue can offset the millions of dollars that other agencies had to work with.  Doritos is pretty smart as well...the $600K that they awarded Five Points was I'm sure a lot less than a what a major agency would charge.   I can appreciate that although bark collars are basically effective, I could never bring myself to use one after seeing dogs suffer in this way.  If owners think twice about using the collars, then the commercial has sold more than corn chips... and that's a good thing.
For the rest of the story go check out the News & Observer.