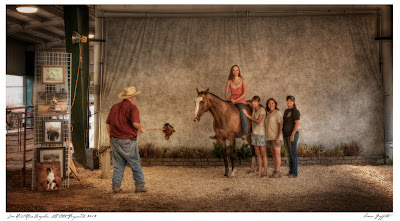 The last time I won 1st place at the NC State Fair was 1986.  A photograph of the "Aleta" mailboat which traveled back and forth to Ocracoke, NC.  This year I have been out shooting scenes of North Carolina again, traveling the back roads more often, meeting people along the way and hopefully making good photographs.   This image was taken a couple of months ago at the Jim Hunt Horse Complex out by the NC State Fairgrounds.  A horse show was going on and I had hoped that my 13 year old daughter would be interested in going out there with me.  Not interested in watching (just riding) I went by myself and came across this scene where a traveling photographer and her husband photographed horses and their owners.  I was taken by the elaborate setup staged just adjacent to the practice ring.  She would take the pictures while her husband distracted the horses with his kiddy pony.  I saw the final image in my mind right away and only got a few images off before the scene was gone.  I would be interested to se the photograph that they produced at the same time.  Maybe I'll head out to the fair and see if they are out there.  I'm sure they would probably do a print trade.  :)   The money can't be that great, but they had a camper and trailer and my impression was that they lived on the road a lot.  Likely no kids.  I think if you don't have much competition in this kind of venture, then you are likely to be able to make a living...albeit sparse.  Any competition however, and it would probably be a hard life.
Obviously it's exciting to win first place in anything, and I'm glad that this photograph won as I had switched a previous image out at the last minute because my gut told me that this photo was a winner.
You have to go with your gut.  Lesson learned....again.