Wiley School - Before and After 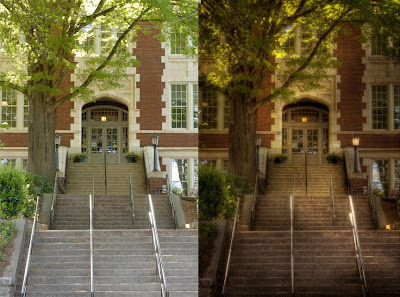 I'm not sure I would make a good journalist. I do consider myself an illustrator. I illustrate with camera, lens, film (or digital), software, etc to create an image that is an interpretation of what I see. The image on the left is how a photojournalist might photograph this scene. There has been some controversy over photojournalists manipulating their images digitally and as a consequence ethics have been put into question. Writers on the other hand are allowed to illustrate a scene in words, yet aren't questioned as to their perspective or point of view, their bias, or what they leave in or leave out in describing a scene, event, or story.
Yes I do believe that photojournalists must have an ethical line that they can't cross, but that line is gray. When photographing an event, the photojournalist must document the scene as they interpret it without manipulation, but the gray area is what is considered manipulation. In the above example, the photograph on the right is certainly manipulated and is "my" illustration of this scene as I interpret it. However, the photograph on the left is also manipulated in how I chose to photograph it. I left out much of the building not showing the people that may have been just off camera. The lens I chose compresses the view. The moment I chose kept cars out of the foreground, however, there were many cars zipping by while I was taking the image. Were the colors that way? What I saw and felt was more of the image on the right. The camera couldn't quite capture what I saw with my eyes. The highlights on the railings caught my attention... the dappled lighting through the trees... the feeling of late afternoon. The camera didn't capture any of that, but it was there. As an illustrator I was able to recapture those feelings of what I saw. Isn't that what a photojournalist should do as well? So the question here is which photograph really captured the scene the way I saw it? The one on the right of course. As a photojournalist the ethical line would have been crossed by turning on the light...which is what I did...and why I'm not a photojournalist at least with this picture.